June 07, 2020
My sister, Kristi, introduced me to the Ten Things of Thankful blog hop several years ago, and she and my mom are both regular participants and current co-hosts (with others). I am not a regular participant because A) I post very infrequently, and B) I often have snarky or not-particularly thankful things I want to post about. But the blog hop is celebrating its seventh birthday this week, so I decided to join in this week.
Of course, this week has been a tough week in a tough year, and so this list will reflect that.
1. I am thankful for the protests.

Do I worry about large groups of people, many not wearing masks, increasing the number of COVID-19 cases in my city and potentially slowing down our reopening? Yes. Am I disgruntled by the vandalism and looting in my city? Yes. But I have seen how videos of the protests are changing the hearts and minds of some people in my life and making them more aware of the lived experience of others, and so I am thankful.
And some of the protests were socially distanced, like the car protest we walked past on Thursday. 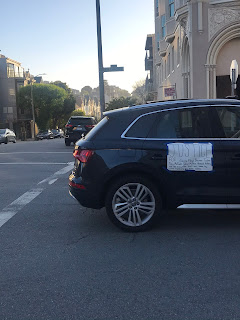 (Photo of a black car with a sign taped to the side. The sign reads, JUSTICE for George Floyd, Breonna Taylor, Tony McDade, David McAtee, Ahmaud Arbery, and the many other black lives taken by white supremacy and police violence.)
2. I am thankful for Black coworkers who were willing to share their experiences this week.

I firmly believe that it is not the job of Black people to educate white people on racism, and that especially holds true at work. But I am always grateful when they choose to share their experiences, and this week has given me some opportunities to listen.
3. I am thankful for Facebook friends who have shared articles, books, essays written by their personal friends, lists of actions, and memes on the topics of racism and police brutality.
4. I am thankful for people who are willing to change.
5. I am thankful for technology that allows us to capture and share recordings of what we see and hear.
6. I am thankful that one of the three pharmacies within easy walking distance of me has reopened after being vandalized in the riots last Saturday. I made a point of stopping in yesterday to make some purchases to support them, even though I was in the small market across the street just the day before and I usually space my store visits out more than that to reduce exposure.
7. I am thankful, during this time of quarantine, that I have an apartment with a view. I enjoy watching the sun rise and set, the crows and seagulls wheel and soar, the ships arrive and depart, and the fog advance, retreat, coalesce, and disperse.
8. I am thankful that after three weeks of hanging forlorn on the balcony, my bird feeder has been discovered by house finches. I enjoy hearing their melodious song throughout the day, especially in the morning. 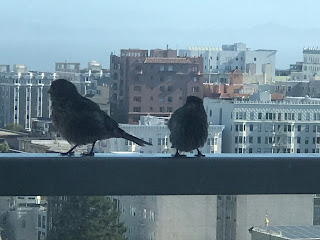 (Photo of two house finches standing on the railing of a balcony, with city buildings in the distance.)
9. I am thankful for serendipitous wildlife sightings. If you want to see sea lions in San Francisco, you can always go to Fisherman's Wharf to see the large colony there, but I was surprised on my walk today to see a small group of seven or so hanging out on the docks near Fort Mason. 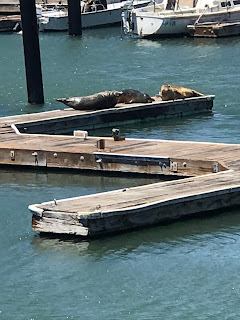 (Photo of three sea lions sunning themselves on a wooden dock.)
10. I am thankful for Youngest Kid. He had his last day of middle school this week. Middle school is a rough time for most people, and he's definitely had his challenges. For starters, he went from a sixth grade class of 13 in a small Vermont elementary school to seventh grade in a large sixth-through-eighth middle school in San Francisco. All the orientation most kids get when they transition to middle school? He got none of that. In fact, when he showed up on the first day of seventh grade, the school office told him that he wasn't in the computer, so they couldn't tell him what classes to go to, and he should just go home. And then, instead of the eighth grade trip and graduation that is typical of his school, he got months of online learning followed by some taped graduation talks and a Zoom meeting with his homeroom to hear the superlatives. (He got "Most likely to help a classmate with his work," which he thinks is lame, but Writer Man and I love.) Through it all, he has been a delightfully cheerful teenager and all around great kid.

Popular posts from this blog 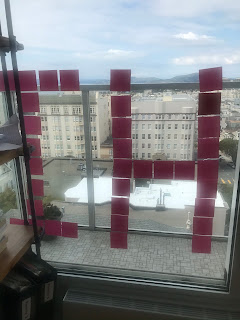 There are a few pieces of good news, for which I am grateful.

The Inspector Gamache novel revived my interest in reading, although I'm definitely happiest staying on the lighter side of my usual reading range. Mystery novels, witches and vampires, and fairy-tale-esque fantasy novels? Yes, please. Novels about suffering in the real world? Rain check, please.

I spent the first week or so of quarantine bingeing TV shows, and reading feels much better.

While we're on the topic of reading, thank heavens for Kindles and the ability to borrow ebooks from the library.

We noticed hearts, peace symbols, and greetings on the windows of the buildings facing us half a block away, so Youngest Kid and I used pink sticky notes to post "HI" in the window facing them. Hopefully it brought a smile to someone's face.

(Photo of the view through a window, showing sticky notes forming I and H.)

Due to my manager urging me to take Friday off, and church streaming the services because n…
Read more

I know I'm not alone in this, and yet it seems odd. After all, we are all healthy. We have a comfortable place in which to shelter, with expansive views and some outdoor space. WriterMan and I can both work from home easily, and although our investments have taken a serious hit, we are not in any immediate financial difficulty. Our older kids are safe and secure where they are, as are our parents, siblings, and other family members, and we have many ways to connect with them.

On the surface, our week was normal, or possibly more relaxed than usual. After all, there was no commute, no Boy Scouts, no errands.

(We were already living like this, and the city of San Francisco joined us, by order of the Mayor who declared "shelter in place" effective 12:01 AM on Tuesday. On Thursday, that extended to all of California.)

And yet, I'm exhausted, and have been pretty much all week, despite getting plenty of sleep on paper.

Some of pro…
Read more

Although other parts of California are starting to open, the Bay Area remains firmly closed through May.

Our own behavior is even more restrictive than what is allowed. We mostly eat food from our storage, supplemented every 2-3 weeks with a delivery from InstaCart and once a week or so with milk and eggs (and ice cream and wine) from the small store across the street.

I've had one masked, unsuccessful trip the hardware store looking for bird seed, and one weekend we bought ice cream cones from a food truck parked at the marina. It was excellent ice cream.

Other than that, we've stayed out of commercial establishments, not even taking advantage of takeout or food delivery services from those restaurants that are staying open.

Well, except for the afternoon Youngest Kid and I spent in the pediatric ER a few days after my last blog post.